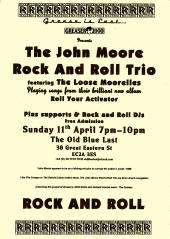 Move over Glasvegas, get a job The Grants and your brethren, there’s a new best band in Britain –best by a mile in fact – so you all might as well give up now and go back to grave digging.

In the great tradition of hailing the new greatest bands in Britain, The Bog Hogs have yet to record a note, set foot on a stage – or even finalize the line up and musical direction – but that isn’t stopping them…Come on NME, front cover now – see your circulation rocket. The Bog Hogs have top management, their own office signs, a box for secret Bog Hogs messages, and special Bog Hogs tea – collected from used teabags, placed in a plastic bottle and labelled ‘Bog Hogs’ Tea Dust – to share’. It looks exactly like some early seventies hippy band’s pot stash…memo to self – do not mention Hawkwind or The Pink Fairies to them. The first Bog Hogs bust can’t be far away – but rather than breaking these butterflies on the wheel, it’ll be the making of them – and there won’t be any Mars Bar innuendos – The Bog Hogs are allowed nothing more tooth-rotting than A Chomp – very reasonably priced at 15 pence, http://www.ciao.co.uk/Cadbury_Chomp__Review_5309437 or for special occasions, a Curly Whirly priced at upwards of 25p.

Before legions of drooling A and R men flood The Guardian offices, desperate to stave off their inevitable redundancy, professional ruin, alcoholism, prostitution, glue sniffing, ebaying and death, let me just say that The Bog Hogs are not for sale – and if they were – you couldn’t afford them – Universal, Warner Bros and the thing that calls itself EMI…They are out of your grasp….for many years to come.

The music – for it is this that ultimately they will be judged on… as well as this piece of hype, is an effervescent blend of Shampoo, Daphne and Celeste, Tchaikovsky Ballet Suites and Crass anarcho punk seditious incendiarism – in other words, the absolute Bee’s Bollocks. Blue Kangaroo – set to the tune of The Star Spangled Banner – is more subversive than anything the Woodstock generation could come up with…well more scatological at least. In fact, add Derek And Clive to the Bog Hogs’ influence list – all the songs are scatological – except for a faithful and gorgeous cover of Eden and Catherine’s song from Barbie’s Christmas Carol. http://uk.youtube.com/watch?v=S3NRQfeNDt4 – sorry about that clip.

Except for a rather unfortunate admiration for Cheryl Cole – whom they believe lives in a swamp and exists on a diet of wasps – wonder who told them that? The Bog Hogs are perfect. Yes of course I have a personal stake in the group…but my dealings are transparent. The band is my seven year old daughter Ava and her best friend Emma-Lee – I’m supposed to be in them too, although I might be their Ian Stewart – http://en.wikipedia.org/wiki/Ian_Stewart_(musician) relegated by some sharp as shit manager to side of stage for coming up short in the looks department. At the time of writing, I am that sharp as shit manager…as well as guitarist, roadie, and responsible adult, but by the time you read this, I may have been replaced by Irving Azoff, http://en.wikipedia.org/wiki/Irving_Azoff and languishing in the line up of Ava’s nanny’s band – The Rocking Monkeys….which A and R men, you are more than welcome to wave your chequebooks at – three bus-pass aged ladies hammering the piano, ukelele and swanny whistle…Hinge, Bracket, and the lady from Mouldy Old Dough.
In these uncertain times, we’ve all got to do what we can.

Thank goodness for warm spring days, weddings (and wedding anniversaries of course – my favourite season for them!) and school holidays and things that go bang. Good friends of mine are celebrating their silver wedding anniversary this summer – so congrats Jane and Kevin.. and expect your present from silveranniversarygifts.co.uk! …The boys in the garden next door have just detonated a bomb. I’ve checked through the window – it wasn’t a large explosion and there still are windows, and they don’t appear to be injured, or dressed for acts of terror – unless you count Arsenal shirts. They are engaged in nothing more sinister than making a bang, and as long as the bomb squad and News 24 don’t turn up, they’ll get away with it. It’s rather nice to think that these schoolboy incendiarists have just reclaimed the small garden explosion as a piece of school holiday fun; a potentially dangerous chemistry lesson perhaps, but one that shouldn’t result in anything worse than a telling off if they’re caught.

Of course, in today’s climate of fear, with evil enemy scientists able to blend the most innocuous household substances into lethal explosives, it’s easy to forget that not so long ago, anybody without an Irish accent could walk into their local gardening shop and purchase enough Potassium Nitrate to blow up a bridge. This was a nice reminder of more innocent – if less lawful times. It felt exactly like being ten years old. It’s gone a bit quiet next door now. Hopefully the boys are just having their tea, and are not beginning forty-two day detentions.

This is so, so wrong – it’s absolutely right. As you read this, members of The Jesus And Mary Chain, Primal Scream, Nine Inch Nails, Sonic Youth and every other band that wore black leather and kicked a fuzz pedal in the pursuance of Healter Skelter will be reaching for their oxygen cylinders and defibrillaters to calm the paroxysms of ecstasy that have thrown them out of their bath chairs. The ultimate rock and roll dream has come true. Charles Manson has asked fellow inmate at Corcoran State Prison, Phil Spector to collaborate with him. So far Spector isn’t playing ball – somewhat disingenuously saying that he finds Manson creepy, but when the offers of a free pardon and a fifty night residency at the O2 centre come crashing into the exercise yard in a puff of green smoke like a scene from Batman and Robin, every body in the whole cell block will be dancing to the jailhouse rock.
This rather naive attitude to a couple of sleazy murderers making a record was my first reaction to hearing this news. As one whose youthful interest in Charles Manson and the Family’s bad vibes destruction of the peace and love generation went as far as visiting Cielo Avenue – the scene of the Tate slayings, tracking down pre CD reissue Manson recordings, naming his debut album Expressway Rising in tribute to Kenneth Anger’s Lucifer Rising which starred family member Bobby Beausoleil, and whose alcohol and substance fuelled musical conversations from 1985 to 1991 normally concluded that the greatest record it would ever be possible to make would be Charles Manson with the Wall Of Sound – I was a bit of a tit, I find the prospect horrible but fascinating.
Of course, like the good middle-class home-counties boy that I am, I have renounced violence and embraced pacifism in all but the most trying of circumstances, and think that any body who has referenced Charles Manson since 1990 – Marilyn, Mansun, Kasabian etc deserve a good slap. I realize that however good somebody is at making records, they can not go about murdering people. One human life should be worth more than every record ever made..and it is but…did I mention my personality disorder? Can you imagine how it would sound? Can you imagine the reverb you’d get in a prison block? The slap back off the walls, the spring of the suicide nets?
Manson-Spector has a ring to it – that strange blurry Californian shimmer, like Wilson Phillips. There would be no shortage of willing accomplices either to provide the musical backing – I just hope that the man from the Red Hot Chilli Peppers would not be allowed to add slap bass.
Perhaps Manson thinks that he will be paroled soon, he’s been in clink pretty much since Neil Armstrong took one giant leap for mankind, and a hit record under his belt could rebrand him and set him up for a comfortable retirement. Spector on the other hand is just beginning his stretch so he’s hardly going to jeopardize any early release by helping fellow inmates…and there is the little matter of Starsailor to make amends for. You never know, perhaps like a Pet Shop Boys from Hell, they’ll appear on an all-new Top Of The Pops. Come the moment, come the men, this unlikely pairing may just be the ones to save the music industry.

AND LASTLY. While we’re on about Crazy Charles, here’s a good clip
http://www.youtube.com/watch?v=Z5IrRe2F7qY